Having the appropriate burger seasoning mix is essential; without it, even the most skilled chef working with the finest tools would fail.

In a seasoning blend, it is not enough to simply use high-quality ingredients; rather, the ratios between those items are crucial. Everything about a burger’s seasoning can be thrown off by the addition or subtraction of just one ingredient.

Making your own burger seasoning? Then you know how crucial it is to have a good mix of components. It’s not something we rule out entirely. However, there are occasions when a premade burger seasoning is the easiest option.

Which spices and condiments go best with a burger? The greatest burger seasonings have a good balance of the standard burger seasoning elements (salt, sugar, several pepper varieties, onion powder, and garlic powder) and one or two additional spices.

Keep reading to find out what goes into a classic burger seasoning! You can also count on us to provide a list of the nine greatest seasonings for burgers.

What Does a Classic Burger Seasoning Typically Contain?

For the perfect burger seasoning, there is a formula that can be followed. It seems that formulation and experimentation are key to figuring out how to possibly go wrong, despite the fact that the process itself should be straightforward.

Seasonings for burgers should be well-balanced and feature a wide range of flavors. They’re perfectly balanced in terms of the two most essential burger seasoning elements, sugar and salt. The proportions of these essential components are simple to get wrong.

You may get several of the best burger seasonings in general purpose seasoning salts. Burger seasoning and seasoned salt are essentially the same thing. They are sometimes called “everything” seasonings since they may be used with almost everything.

That doesn’t mean you can’t get creative with your burger toppings. Almost any seasoning you’d use on burgers would also be great on fries, steak, potatoes, or poultry.

It’s possible that restaurants were the ones who first thought of creating all-purpose seasoning salts in an effort to standardize their cooking processes. Several of the best burger seasonings included in this blend may be traced back to well-known eateries across the country.

In addition to their basic tasting functions, salt and sugar work together to amplify the other spices and seasonings included in the greatest burger seasonings.

Without going into too much detail on the scientific side, consider this our explanation.

The meat is tenderized and flavored in the marinating process thanks to the role played by salt and sugar. The sugar and salt in the burger help the fat render while it cooks.

While it’s true that even the most skilled chefs working with the finest tools may ruin a burger, it’s the sugar and salt that make for a juicy interior and crisp exterior.

Common types of salt and sugar include sea salt and cane or brown sugar, respectively.

Other Spices and Seasonings Common to Burger Seasonings

There are a few spices that will appear as the base in nearly every conventional or unorthodox burger seasoning, along with sugar and salt, which can vary by kind.

Some examples of these seasonings are:

We understand that cinnamon and any spice may seem peculiar. Though it may come as a surprise, both are common ingredients in meat dishes from around the world. Paste sauces and Mediterranean-style beef dishes typically have one or both of them as the mysterious missing component.

The best burger seasonings have the proper amount of sugar, salt, and all the other spices.

The seasoning on your burger will be ruined if you use too much of any one spice. Too much cayenne, for instance, will make the seasoning blend more fiery than flavorful. Other components like cinnamon and mustard powder will often be used in smaller amounts compared to the others. This prevents them from taking over the system.

Milder flavors like garlic powder or onion powder can still be too much for some people.

The greatest burger seasonings will typically include one or two more ingredients in addition to these basic, foundational spices. These offer variety and help them stand out above the rest.

The entire family is dear to us. We think you’ll find a fair variety of combinations on our top 9 list, from the tried and true to the out of the ordinary.

For decades, Lawry’s Seasoned Salt has been one of the most popular spice mixes in American restaurants and, presumably, in people’s own kitchens.

Lawry’s Seasoning Mix is a classic seasoning blend with just the appropriate quantity of herbs and spices to complement the perfectly balanced ratio of sugar to salt.

Lawry’s seasoned salt is one of the most multipurpose spice blends because it can be used in marinades, dry rubs, and on practically any other food. Reasons for this include the dish’s ease of preparation and the harmony of its flavors.

Aside from salt and sugar, paprika, turmeric, onion, and garlic are also listed as ingredients in Lawry’s seasoned salt. There are likely some extra seasonings included that are optional to list. Given that neither the turmeric nor the paprika really shine on their own, I would guess that their main purpose is purely aesthetic.

The second burger seasoning to make this list is McCormick’s Grill Mates Hamburger Seasoning. This is a great example of a burger seasoning that is still simple and versatile enough to be considered a seasoned salt or all-purpose seasoning mix.

The big difference between Lawry’s seasoned salt and McCormick’s burger seasoning blend is that McCormick’s packs just a little more heat. That heat is not as detectable on a burger but may be easier to taste in poultry or potato dishes.

Some people may find that the slight increase in spicy ingredients in McCormick’s makes it flavor profile bolder if they are sensitive to spice. The listed spices in McCormick’s burger seasoning are sugar, salt, black pepper, red bell pepper, chili pepper.

In addition to being the third most popular seasoning on our list, it is also the most novel. You can’t find anything else like Historic Lynchburg Tennessee Whisky Steak & Burger Seasoning, and there are two reasons for that. To begin with, it does not include any sugar, and secondly, the sweetness comes from Jack Daniel’s Whiskey.

The Historic Lynchburg burger seasoning is great for grilling, but it also enhances the flavor of other meats, veggies, and potatoes. Sweet and smoky flavors complement the more conventional herbs and spices in this mixture.

The original Famous Dave’s barbecue restaurants can be located in the Midwest of the United States. Steaks, burgers, ribs, chicken, beef brisket, various varieties of barbecue sauce, plus a few additional entrees and sides make up their award-winning menu.

It’s no surprise that their burger seasoning made the cut, given its adaptability and widespread renown. All Famous Dave’s burgers are seasoned with the same blend of spices. The restaurant chain’s continued success is evidence of the product’s high quality.

This seasoning mix’s complexity, in comparison to the other burger seasonings on this list, is likely a big reason for its widespread use and appeal. Lemon juice, celery seed extract, and natural smoke flavour are some of the more distinctive components.

In addition to the beef, salt, sugar, garlic powder, dehydrated garlic, and parsley are listed as ingredients for Famous Dave’s burger flavor.

Another well-known chain, Steak N’ Shake is renowned for its Steakburgers and extra-crispy, thin-cut fries.

The first Steak N’ Shake restaurant opened in the 1930s. Given the chain’s success, it’s safe to assume that the burger seasoning they use to coat their fries is a tried-and-true recipe.

Steak N’ Shake’s original seasoning is another great illustration of the benefits of keeping things simple. Many common seasonings are unavailable, including the ones on the list.

This spice is the next best thing if you’re a fan of the Steak N’ Shake flavor but don’t happen to live in close proximity to one.

St. Elmo’s burger seasoning is an adaptable classic blend that is another example of a simple yet elegantly balanced seasoning combination. It’s comparable to the first few choices above. The success of this mixture is a tribute to the simplicity of its formulation.

Unlike many other burger seasoning mixes, St. Elmo’s does not use the vague term “spices” on its packaging. Onion, black pepper, paprika, celery, and garlic are among the few additional ingredients beyond the standard sea salt and evaporated cane juice.

On the list of unusual burger seasonings, Everglades Seasoning all purpose seasoning stands out. The distinctive flavor profile and the history of the seasoning blend’s production both contribute to its one-of-a-kind status.

Everglades Seasoning, the creation of a former Mess Sergeant, made its debut in 1975. While serving in the Pacific Theater during WWII, the native Alabamian created his famous seasoning blend on the island of Saipan.

The clever Sergeant’s spice mix, made to help the rest of his company adjust to a diet consisting mainly of mutton and goat, was an instant hit. Back in the States, the blend quickly gained favor as the go-to seasoning at the general store where its creator worked.

Its adaptability to a wide variety of foods—from burgers and steaks to popcorn and eggs—was a key factor in its eventual commercialization. Papain, a powdered meat tenderizer derived from unripe papaya, is responsible for the dish’s signature somewhat sweet and tropical flavor.

In addition to the dehydrated garlic, dehydrated onion, and sugar, this Everglades All Purpose Seasoning also contains salt.

This is one of the few seasonings to incorporate the controversial flavor enhancer MSG, despite the fact that much of the research suggesting the risks of MSG has been disproven.

Among the nine burger seasonings we considered, the one with the shortest amount of ingredients is the second McCormick spice mix on our top nine list. Still, there is something here that surprises with its potency.

Common generics phrases found on ingredient labels are “spices” and “natural flavorings,” both of which can refer to a wide variety of different things. We can only speculate on their identities because they are not regarded allergens and contribute significantly to the distinctive flavor of many foods.

There are a few distinguishing characteristics of McCormick’s Montreal Steak spice blend. The garlic and black pepper, two of the more prominent ingredients, are utilized more liberally than in most burger recipes.

Garlic and black pepper, together with a proprietary blend of other dry herbs, can be used to great effect when grilling meats like burgers and steaks. McCormick’s Montreal Steak seasoning blend gets its tangy taste from a wide range of herbs.

You’ll find coarse salt, black pepper, red pepper, garlic, onion, sunflower oil, and extractives or paprika in this burger seasoning. All the paprika extract probably serves as is a splash of color. There is no added sugar to this blend, making it one of the savory choices here.

Weber is a household name, most notably as the maker of grills found at any decent hardware shop.

This company’s formulation of a proprietary blend to season meats for grilling certainly doesn’t come as much of a surprise to you.

Since it’s the hottest option available, this spice is also one of a kind. It uses jalapeo peppers, chili peppers, and bell peppers to give your burger some kick.

Nonetheless, the heat is balanced by the other flavors. Brown sugar is used to temper the extra spice, resulting in a flavor that is both sweet and savory with just a hint of fire.

The spiciest of the bunch, although not quite a hot sauce. 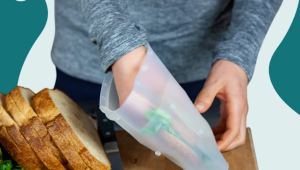 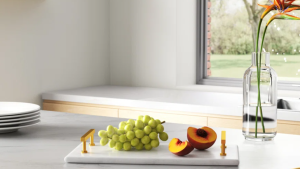 Best Serving Trays- Serve Your Drinks and Snacks in Style