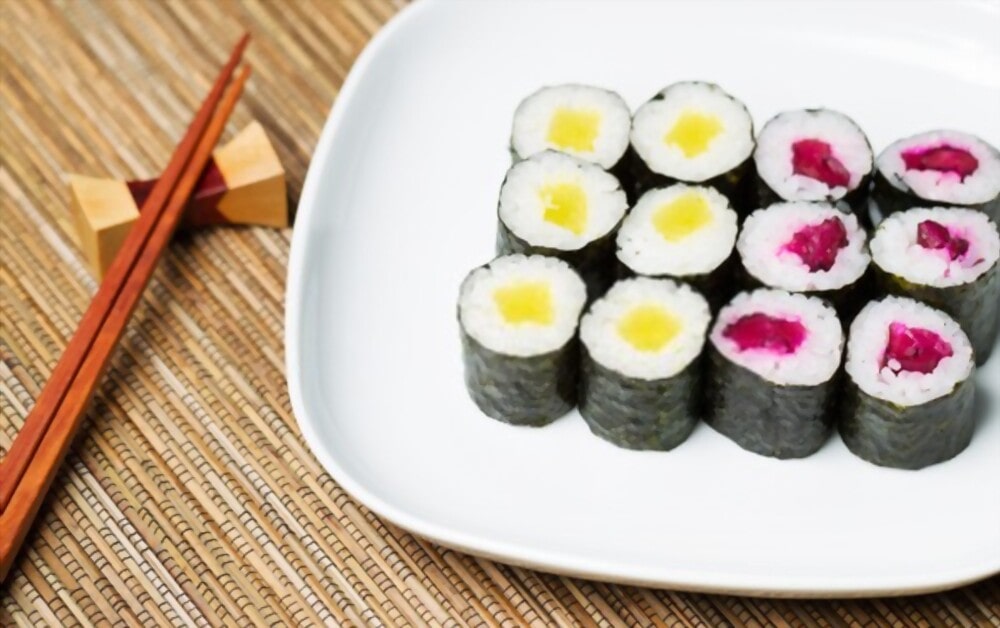 Oshinko maki, a popular Japanese dish, is often listed among the Vegetarian or Vegan options in Sushi restaurants. It’s usually served as either a side dish or an appetizer. Although Oshinko commonly refers to a handful of different Japanese pickled vegetables, most of the time it is made out of Daikon Radish. Daikon is simply another term for White Radish or Japanese Radish. But when you are eating this particular vegetable in a Sushi roll, you will notice that the Oshinko has a bright yellow color to it. And that’s simply because it has been pickled. Adding food coloring or turmeric causes the pickled daikon to turn yellow.

What is Oshinko maki?

To understand what Oshinko maki is, let’s dive a little deeper into what Oshinko is. As mentioned above, Oshinko is the term commonly used for many types of Japanese pickled vegetables, but mostly for pickled Daikon Radishes. The Japanese word ‘Oshinko’ translates into ‘Fragrant dish’ or ‘Fresh aroma’ in English. And when that Oshinko is added to a Sushi roll, the Sushi roll itself is called Oshinko maki, maki being the Japanese term for “roll” because Sushis are generally made out of rolled-up Seaweed, Sushi rice, vegetables, and/or fishes.

It’s no wonder that Oshinko maki will taste like your typical vegan sushi, but its taste mainly depends on the Oshinko. Before the Oshinko has been pickled, it is most likely that you will get a mildly sweet taste out of it. It does not have a strong taste and has a perfect balance of juiciness and crunchiness. but after being pickled, due to the vinegar, it may have a slightly salty taste to it.

And as for the entire Oshinko maki, its taste may mainly depend on the other Sushi fillings, if there are any. Since the primary and minimal recipe requires just Seaweed, also known as ‘Nori’ in Japanese, Sushi rice, and Oshinko, the taste of Oshinko maki may mainly center around the taste of the Oshinko.

But then again, one can add their desired fillings alongside the Oshinko such as Eggs, Salmon, Cucumbers, etc so that they also can add to the taste.

How to make Oshinko maki?

Preparing Oshinko maki starts with pickling the Radish. In other words, it starts with the Oshinko and then comes to the Maki. To prepare the Oshinko, you will need the following ingredients:

Now to prepare the Oshinko, you just need to chop the Radish into thin, finger-length strips. Then comes the second and last step, put all the above ingredients together into the airtight jar and store it in the refrigerator for at least 2-3 days. You can use the pickle for up to 1 month from the refrigerator.

Moving on to preparing the Oshinko maki. You will need the listed ingredients below:

Now, simply lay the Nori sheet on top of the bamboo mat. Gather your Sushi rice mixed well with Sushi vinegar and spread a layer of the rice on top of it. But do not cover it with the rice all the way. Make sure to slightly dampen your fingers so that the rice doesn’t stick to them.

Then grab your pickled Radish from the fridge and place them horizontally on top of the rice. Once again, you may put your desired Sushi fillings alongside the Oshinko. Once you’re done doing so, wrap up the bamboo mat and press all the ingredients together so that they don’t fall off when the mat is taken off.

Once you start to feel all the ingredients sticking together, take off the bamboo mat and cut the roll into your desired shape. And there you have it, homemade Oshinko maki, just in a few easy steps!

The health benefits of Oshinko maki mainly center around Oshinko itself, proving that most people use only Oshinko as the filling in Oshinko maki. Some people claim Oshinko to have probiotic properties. But that is not quite the case. Since Oshinko is basically pickled radish and not fermented, they do not have probiotic benefits. However, they do come with a handful of other benefits that include the followings: